Words to the World：Radiating Truth from Fukushima

It seemed clever at the time. In early 2011, a conference announcement promised a " Tsunami of Genome Science." After 3.11, the organizers rebranded their theme to " Revolution in Genome Science " and offered thoughtful condolences to those affected by the magnitude 9.0 earthquake and tsunami.
English speakers use the Japanese word tsunami both literally and figuratively. Literally, the tsunami of March 11 reached a height of more than 30 meters in some places, and swept seawater inland up to several kilometers. Figuratively, scientists and medical professionals in Tohoku experienced a second tsunami, namely, a flood of email inquiries from colleagues around the world, concerned for our safety. As these emails poured in, it became clear that people were shocked by what was reported in the media. They wanted to understand the situation in Japan from the perspective of trustworthy peers living and working in Tohoku.

Fukushima Medical University (FMU) did not lose electricity, telephone, or Internet. So faculty and staff could, in principle, communicate with international colleagues. In practice, however, time was a limiting factor. FMU became a center for emergency care, receiving patients by air and ground ambulance from anywhere in the disaster area. In addition to receiving patients, we were soon involved in outreach, sending healthcare teams to refugee shelters.
Although electricity was never interrupted at FMU, there were shortages of water, food, gasoline, and other supplies. These shortages made working conditions more difficult. Research and teaching activities were suspended to direct full attention to patient care and other disaster response activities. Those not directly involved, including most students, were released to help their own families and communities. Some students volunteered on campus, guided by orthopedic surgeon Dr. Koji Otani. 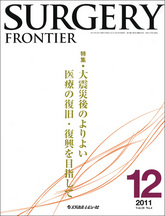